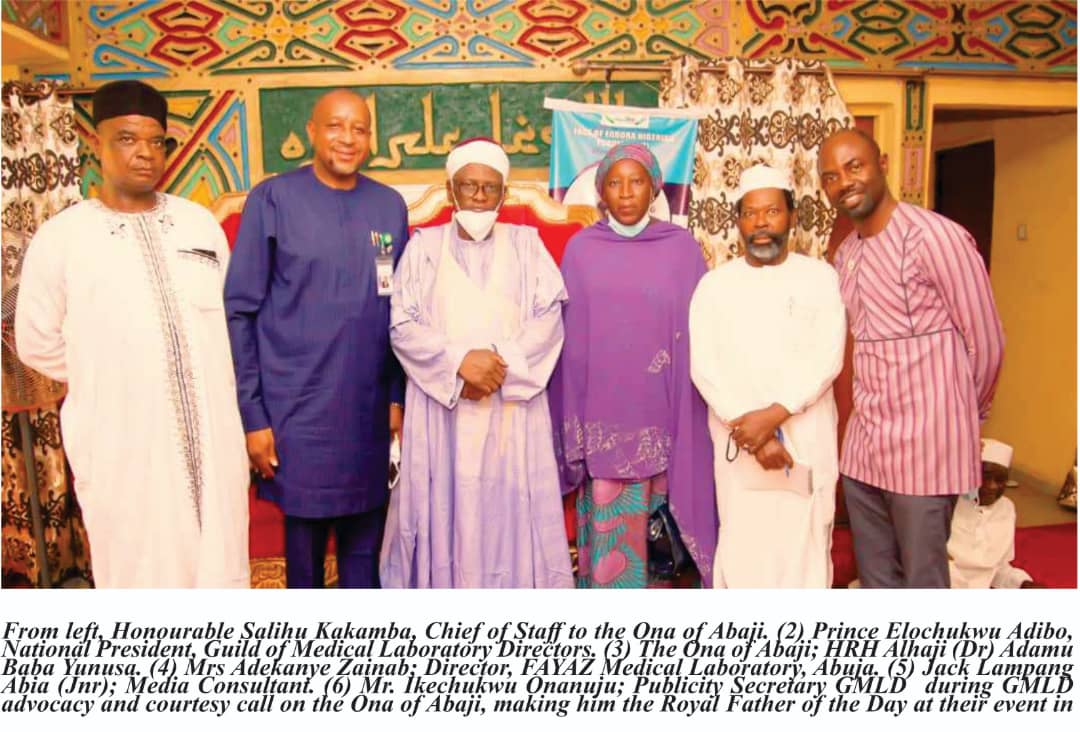 The Guild of Medical Laboratory Directors (GMLD)has expressed concern over the federal government’s policy of importing vaccines to fight against epidemics and pandemics in the country.

The GMLD President, Prince Elochukwu Adibo, said this when he led the guild on a courtesy visit to the palace of Ona of Abaji and the Chairman, FCT Council of Traditional Rulers, His Royal Highness, Alhaji (Dr) Adamu baba Yunusa.

A statement from Jack Lampang Abia (JNR), Media Consultant GMLD quoted Prince Adibo as saying that the production, availability and accessibility of the current produced COVID-19 vaccines to developing nations have become a source of worry to the Guild of Medical Laboratory Directors.

“Nigeria has no business importing vaccines, we can produce any human vaccine in the country, we have the capacity, manpower and human resources to do so.”

Adibo while citing experience from the past noted that the Laboratory Scientists in Nigeria have done it in the past and can still do it today as he said Nigerian Medical Laboratory Scientists produced Small Pox Vaccine in Nigeria at the Yaba Vaccine Centre, supervised by World Health Organisation (WHO), not only for Nigerians but for the entire West African citizens in the fight against Small Pox in the sixties up to the early nineties.

“Any nation that depends on foreign vaccines is toying with the health of its citizens, as global politics on vaccine production, availability and accessibility are not favourable to under-developed nations.”

Adibo also said developed nations that produce vaccines have discriminatory and protective tendencies against less privileged countries who cannot afford to produce human vaccines because they want to make the vaccines available to their citizens before considering other nations.

Adibo further said, “that is why the Guild of Medical Laboratory Directors has planned their National Scientific Conference for Abuja at the International Conference Centre, with the theme: “Harnessing Awareness of Public-Private Mix for the Production of Human Vaccine and in In—Vitro Diagnostics”, to find a final solution to producing local human vaccines in Nigeria.”

He said that Nigeria begins the work of producing human vaccine today, it will take three years to actualise the vaccine production dream in the country.”

He therefore invited the Ona of Abaji, His Royal Highness, Alhaji (Dr) Adamu baba Yunusa, as Royal Father of the Day to the Guild’s National Scientific Conference, holding at the Abuja International Conference Centre, on the August 17 – 20, 2021.

In his response, the Ona of Abaji praised and thanked the leadership of the Guild of Medical Laboratory Directors as he described the Laboratory Scientists as the cornerstone of health providers and the doctors’ doctor by saving lives silently in their medical laboratories through their empirical laboratory diagnosis.

He encouraged them to do more in the areas of research and development to find cures to the numerous diseases and infections afflicting mankind today.

The Ona of Abaji however said he was very worried over the prevalence of fake and hard drugs in the country.

“I am very happy with your visit to my palace, medical laboratory scientists all over the world play vital roles in saving lives.”